I'm Still Wild
About Harry's
THURSDAY, MAY 19, 2022 -- Every 15 years, I make a pilgrimage to Harry's Bar Roma on the stylish Via Veneto. I'm happy to say that I'm still wild about Harry's.

With so many Harry's Bars dotting the globe, it would be safe to assume that they are links in a chain. They aren't. If anything, they are a loose confederation. Harry's New York Bar in Paris is probably the best-known outpost thanks to a platoon of unofficial publicists who've touted it as the birthplace of the International Bar Flies organization. Then there is the original Harry's Bar in Venice which has, in my opinion, become an overhyped, overpriced, underwhelming tourist trap.

For my Euros, the single most civilized Harry's is the Rome location. And now couldn't be a better time to enjoy it.

On my first visit 30 years ago, it was the saloon in the Eternal City. You could barely get a drink from the one silver-haired, white-jacketed barman. He stood calmly in the eye of a happy-hour hurricane, mixing one cocktail at a time at a small, U-shaped bar. You just waited your turn amid the throng.

My second visit to Harry's Bar Roma, in June, 2009, found no loss of luster from the days when it was the preferred hangout in Federico Fellini's noir epic, La Dolce Vita, the landmark cinematic study of mid-century decadence. The black-and-white film featured 1960 Rome as seen through the jaded eyes of the brooding, handsome Marcello Mastroianni. 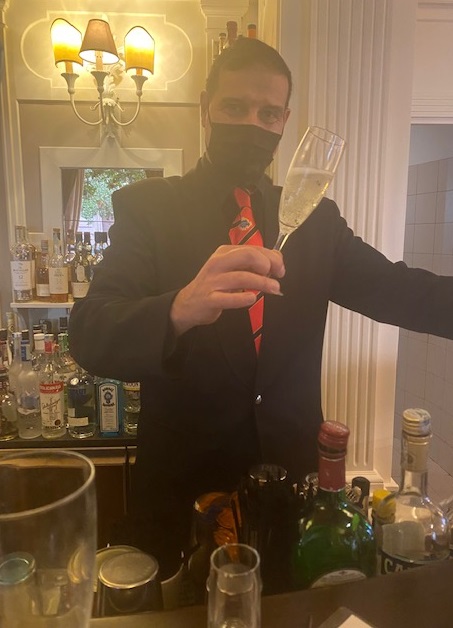 Harry's today? Still busy. The bar is a bit larger and now has a necklace of a dozen barstools to give some of the stand-up drinkers a chance to relax their feet. You now also have a choice of covered outdoor drinking and dining. I chose the former. It was more familiar and felt welcoming.

The head bartender, Lucca Patrizi, is the personification of cocktail civility. Dark-jacketed and sporting a red tie, he has the skilled hands of an expert juggler. He has 25 years' experience as a barman, having started as a "bar back." He has mastered the enviable art of being soft-spoken and smiling without being either intrusive or above the fray. He not only works behind the small, curved bar, but he'll also deliver food orders to dining tables if a server gets too busy. That shows real class. Too many bartenders refuse to leave "their" plank no matter how crowded a place gets.

Working underneath a high-ceilinged space, Patrizi speaks excellent English. Since it was early in the afternoon (too soon for my preference of a very dry Martini straight up) I ordered a gin and tonic in a highball glass. He quickly and quietly sprang into action, reaching into a forest of perhaps 125 bottles on his backbar, deftly plucking out a liter of Beefeater London Dry Gin, opening a bottle of Schweppes tonic and mixing the generously poured cocktail right before my eyes. Cocktail prices average 14 Euros plus tax and tip, or about US$20, on a par with many upscale American bar tariffs today.

What differentiates Harry's Bar Roma from a typical cocktail bar, even an Italian bar, is that Patrizi crafted the simple-to-make cocktail in front of me, not down in the well or out of sight. I felt involved in the drink-making experience. Secondly, he pours the pricier Beefeater from the well instead of some cheaper gin. Third, he left the bottle of Schweppes in front of me so I could refresh my drink. That is a thoughtful touch rarely seen at an American bar where the remaining tonic might be used in the next drink or, worse, a lower-quality tonic might be shot out of a bar gun.

I asked Patrizi which cocktail he makes most frequently. His answer surprised me. It's still The Bellini, created by Giuseppe Cipriani at the original Harry's Bar in Venice. It was originally a mixture of fresh peach juice and Champagne. But with the global popularity of Prosecco, Harry's Bellini cocktail is now generally made with the Italian bubbly. However, purists can still get the real thing on request.

But with his sterling silver cocktail shaker in hand, Patrizi said that his gin and vodka Martinis are still perennially popular and the Gibson, a super-dry Martini garnished with a small white onion instead of an olive or a lemon peel, is also a favorite. The Negroni--gin, Campari and sweet vermouth--is frequently ordered. Also popular today among Romans? The Spritz Veneziano (Prosecco, Aperol and a splash of soda). You may know the cocktail as an Aperol Spritz. And Fernet Branca, the bitter Milanese digestivo that became the rage among some young Americans a few years ago, is alive and well at Harry's Roma. Drink it straight--if you can stomach it.

I missed the Hollywood-on-the-Tiber years when the likes of Marlon Brando, Anthony Hopkins, Anita Ekberg and other bold-name jetsetters packed Harry's and the Via Veneto, either dodging or preening for the paparazzi. Rome's cinematic bone fides in 1950s and early 1960s was also boosted by the elusive billionaire Howard Hughes. He owned RKO Studios and TWA, which launched Los Angeles-to-Rome service immediately after World War II.

Still, the stars of the spirits world today are very much in evidence at Harry's in Roma to sate the tastes of libational adventurists. On the backbar are brands rarely seen in anything but the best thirst parlors: Laphroaig Scotch, Havana Club Rum from Cuba and Gordon's, the Scotland-distilled premium London gin and not to be confused with the cheaper, American made Gordon's.

Chatting with Patrizi is delightful.

"Bartending is a serious profession in Italy," he says. "Neither intrusive nor standoffish, but attentive." You must do the bartender's work in a "hurry, but glide silently, [doing] nothing to distract from the guest's" pleasure.