Ella Fitzgerald in Flight:
The Songs and the Story
THURSDAY, APRIL 28, 2022 -- Monday marked the 105th anniversary of Ella Fitzgerald's birth and it is sad that the First Lady of Song's (literal) highest achievement--an astonishing pair of live, in-flight concerts--is ignored because we are prisoners of an industry now so warped that it that thinks nothing of beating us out of our seats or abandoning us for days after a little rain.

The obscurity of Ella's 1983 live shows on Continental Airlines is doubly ironic when you consider that a video of Kenny G blowing his sax for a few minutes on a Delta Air Lines flight a few years ago went viral and is feted as remarkable. Yet one of the greatest popular vocalists who ever lived fronted a trio in the bulkhead of a widebody flight one winter day and sang and swung and scatted from O'Hare to LAX and almost no one knows about it a generation later.

That's insane. It's a crime against American culture in general and the American songbook in specific.

How can this amazing live event be almost totally forgotten in an era when we've convinced ourselves that airlines were once kinder and gentler and more creative companies? Save for a famous painting--not even created contemporaneously--and one story in Jet magazine--fortuitously captured by Google books--Ella's in-flight shows have somehow been lost in time. 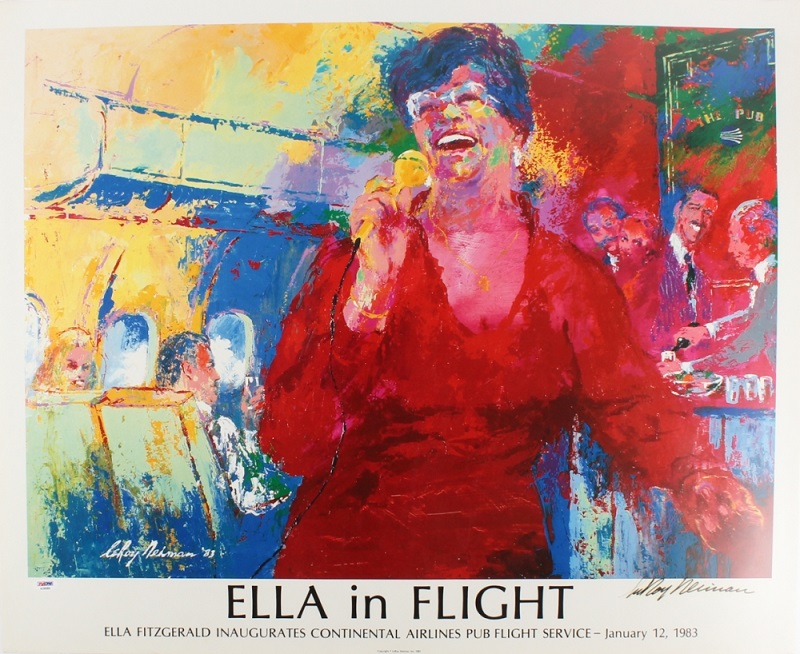 "It was exciting and the whole place was just gone," remembers Clarence Waldron, the famed former Jet music writer who was only at the magazine about 18 months when he was rushed to O'Hare Airport to cover the flight to Denver.

"I can't believe that she gave me an interview," he recently told me. "I'd never flown first class before and there I was sitting next to Ella Fitzgerald."

Let me back up and offer background and context to explain how Ella and her trio serenaded a few incredibly lucky business travelers and Continental executives on a DC-10 flying the Chicago/O'Hare to Denver/Stapleton to LAX route on January 12, 1983.

In the 1970s, Los Angeles-based Continental was a major operator of the then new and exotic Boeing 747 and McDonnell Douglas DC-10 "jumbo" jets. It was a carrier already known for fine meals, top-notch service--and the more-than-slightly-sexist catchphrase "We really move our tail for you!" Other airlines outfitted their first generation of widebody jets with lounges, too, but Continental went a little further. Its first class lounges were huge and its coach spaces were dubbed "pubs." Continental built several ad campaigns around the coach pubs. Here's a generic TV spot and a second fronted by the legendary Vin Scully. Continental even teased other carriers with a famous campaign dubbed "Sorry Bub, No Pub!"

But Continental was financially weak, the in-flight pubs and lounges fell out of favor and Continental became the only carrier ever to fall in a hostile takeover, reverse-merged in October, 1982, into Frank Lorenzo's Texas International. However, a new batch of pub-equipped DC-10s was arriving in early 1983 and Lorenzo's new management needed a fast and flashy promotion for the revived in-flight lounge concept.

"We only had about four weeks' notice," recalls Bruce Hicks, who ran the airline's communications at the time. He told me this week that Continental's advertising honcho, Jim O'Donnell, suggested live entertainment for the kick-off flight. Hicks hit on Ella and Continental's advertising agency cut the deal for her to perform. An employee at an outside PR agency had the idea to hire LeRoy Neiman to paint the event as part of a "pub series" of bar scenes he was already creating.

The ensuing weeks were jammed with late nights and endless details, Hicks recalls. An existing ORD-DEN-LAX flight was blocked from sale for the event although travelers already booked kept their seats and reservations.

On the day of the flight, Neiman made some preliminary pencil sketches at O'Hare and disembarked without ever watching Ella sing. He completed the painting using photographs and television news footage. Neiman, Hicks recalls, was not easy to work with.

Ella, on the other hand, "was so wonderful, a joy," Hicks says. Waldron agrees. "She should have been resting before her set, but she let me sit right next to her. She answered all my questions and let me get my story," he recalls.

In those days, Ella's traveling trio consisted of Paul Smith on keyboards, Keter Betts on bass and Bobby Durham on drums. I could not confirm that Durham was drummer on the Continental gig, but Smith and Betts were on the flights.

The concert on the Chicago-Stapleton leg lasted about 35 minutes, Waldron remembers. As flyers and Continental brass crowded into the pub area, Ella did her set and Waldron especially recalls her classic rendition of "Old McDonald," the corny tune that she turned into a jazz tour de force. "She did all this music and all the animal noises, too," he says. "It was unbelievable." (I found no audio or video of the Continental show, but here's the album version of Ella and the trio doing "Old McDonald" during a Tokyo concert several months later. And here's video of her killing it in a Vienna concert in 1981.)

There was a surprise waiting for Ella when the flight landed in Denver. Throngs of passengers and fans were at Stapleton Airport hoping for a glimpse of the jazz icon. Or as Waldron wrote at the time, "If she was loved in Chicago, she was simply adored in Denver."

Hicks told me this week that there was no plan for Ella to get off the flight in Denver. "It wasn't in the contract or anything. We assumed she'd want to rest because she had to sing again on the Denver-LAX segment."

But that was not how Ella rolled. She lived to tour and perform and when she heard about the crowds waiting for her at the gate in Stapleton, she disembarked. "I need to go to my fans," Hicks remembers her saying. "The next thing I know, Paul Smith and [Keter Betts] are out there, too. Paul starts playing and Ella starts singing. She must have done 20 or 25 minutes at the gate."

Highlight of the impromptu Stapleton set? According to Waldron's contemporaneous account, it was Ella's take on Rodgers and Hart's "The Lady is a Tramp." (Here's Ella and Paul Smith's quartet doing the number during a legendary 1960 concert in Berlin.)

On the Denver to Los Angeles flight, Ella did her third show of the day, complete with another of her evergreens, "Mack the Knife." (Here's a snippet of Ella and the trio on the tune during a 1983 concert in Montreal.) And when the flight was on final approach into LAX, no one could stop her.

"Paul's keyboard is in the overhead, the bass is stashed in one lav and the drum kit is in the other," Hicks recalls. "The music has stopped, but she won't stop scatting. I'm holding on to her and trying to direct her to her seat, but she just keeps going." The story--and the music--doesn't stop there. After Neiman finished his painting, Hicks arranged for its unveiling in April at a travel-trade event at Chasen's restaurant in Los Angeles. Neiman was contractually required to be present, but bailed.

Ella was invited, but not expected. Just in case, though, Hicks hired Smith to provide the entertainment. "Of course she came," Hicks recalls. "Paul starts playing and says, 'Come on, Ella. Give us a little song.' She did, for at least a half-hour. Unplanned, unpromised. That's who Ella was. Then she proceeded to autograph prints of the painting for every person there!"

Now general manager of The Alliant Group/Houston, a crisis-management firm, Hicks admits he doesn't remember as much of the music as he should.

"I was so concerned with the details that I didn't get to really enjoy the performances. But the Ella flights are some of my greatest memories. She was a lovely woman, all about the music and the audiences."

MORE ABOUT ELLA'S LIFE AND TRAVEL
Ella's grace and talent didn't always matter to the airlines. In 1954, Ella was stranded in Honolulu by Pan Am. She and her party were booked through to Sydney--as usual, Ella was on tour--but Pan Am bumped them in favor of a party of (white) favorites. Ella sued. Pan Am's defense? How dare a passenger--and a black woman at that--use the courts to protect their rights. Pan Am insisted Fitzgerald's only recourse was a complaint to the Civil Aeronautics Board, the federal agency that then regulated U.S. airlines. A federal district court ruled for Pan Am, but Ella won a reversal from the U.S. Court of Appeals. The suit was settled out of court in 1956. For her trouble, the bumping and the ugly racism, Ella received $73.67. Never one to talk about herself, Ella did discuss the case in 1970 on the CBC.

Aren't as familiar with Ella's music as you should be? She recorded almost as prolifically as she toured. Her songbooks are an acclaimed series of nine albums covering music created by some of America's greatest songwriters. Meanwhile, Twelve Nights in Hollywood is an astonishing posthumous box set recorded during a 1961 engagement at a Los Angeles nightclub. It captures Ella in her absolute prime on the road. Then there is the bedrock for any Ella fan: her three albums with Louis Armstrong and the Oscar Peterson Quartet. Start with 1956's Ella and Louis, often called the "pinnacle of popular singing." Finally, check out this Tokyo concert in October, 1983. Ella would have sung some of these tunes, using these arrangements, during her in-flight Continental gigs and the Stapleton Airport stop. There's a big band behind her, but Smith, Betts and Durham are with her.

Column and JoeSentMe.com Copyright © 2017-2020 by Joe Brancatelli. All rights reserved.